Ogham script is an early form of old Irish, the first known Irish writing. The characters comprise a series of lines and notches that are scored across a long stem-line often on standing stones. In the majority of cases, the inscription is read from the bottom up and usually names the person being commemorated along with their ancestors and the carver of the inscription.

Over 350 Ogham Stones are known, with the majority found in Southern Ireland from Kerry to Waterford and in South Leinster. They also occur in small numbers in Western Scotland, the Isle of Man, and in Cornwall at Lewannick, where the Irish settlers from Munster landed and founded communities. While the stones in Ireland are written purely in Ogham, those in Britain often have the Ogham repeated in Latin and carved in Roman characters on the same stone.

In legend, Ogham was said to have been created by Ogma, the son of An Dagda. Ogham was both a warrior and the God of Eloquence and Literature. He fought the second battle of Magh Tuireadh where he slew the Fomorian Indech, son of the Goddess Domnu.

Ogham jewelry pieces include the Ogham Alphabet and are available in sterling silver and 18K gold crosses inscribed. 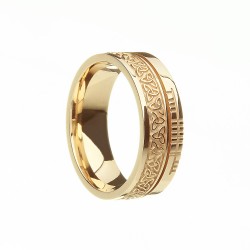 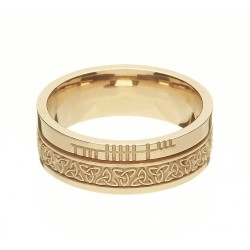 Brand: Boru Jewellery
Gold Trinity Knot with Ogham Script Faith Wedding Band
Unique hand crafted Trinity Knot Wedding Ring with Ogham Script from our Faith Collection. The ring contains Trinity Knots on one side and Ogham writing on the other to create a unique wedding band for the one you love.This ring is available in all yellow or all white Gold or two tone as shown. ..
1,060.00€
Add to Cart
Add to Wish ListCompare this Product
Buy NowQuestion
Quickview 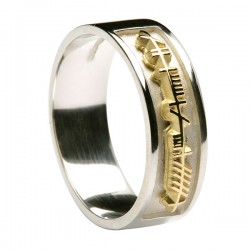 Brand: Boru Jewellery
Gold Celtic Knot with Ogham Script Faith Wedding Band
Hand crafted Celtic Knot Wedding Ring with Detailed Ogham Script from our Faith CollectionThe ring contains Celtic Knots on one side and Ogham writing on the other to create a unique wedding band for the one you love.This ring can be made in all yellow Gold, all white Gold or two tone as s..
1,060.00€
Add to Cart
Add to Wish ListCompare this Product
Buy NowQuestion
Showing 1 to 3 of 3 (1 Pages)
Our newly added House of Lor collection is the only Irish Jewelry collection in the world made with gold mined in Ireland. Exclusive to the House of Lor. Rare Irish gold in every piece.